The 5 lessons Games2win learnt from its No.1 iTunes game ‘Parking Frenzy’

On the 7th of June 2012, Games2win’s ‘Parking Frenzy’ – a free, casual, mobile game became the No.1 ranked app on the iTunes store in the USA under the ‘Top Free games’ and more significantly ‘Top Overall apps’ categories. We believe that we are the first ‘Indian’ Games Company to have achieved this honor!

So, what were the key lessons that Games2win learnt as it achieved this significant milestone?

1. What works on the Web, works on Mobile.

Games2win has a massive library of over 600 casual, flash games. These games are played by more than 15 million unique users every month (as per comScore). The one genré that always stood out and outperformed the others was the genré of ‘Parking Games.’

Once we had perfected this game genré and witnessed long-term engagement (time spent*returning users), we began converting our select titles to Mobile (iOs and Android games).

This is ‘Parking Frenzy’ online (click on image to play online) : These are few of the other titles that we are rapidly converting to mobile games (click on images to play online) :

Lesson – if you have a site or a game or anything that works well with consumers, there are high chances it will work well with Mobile users also

Let’s face it. The art of “Parking Frenzy” looks like it’s out of the 70s.

That’s partially because it is one of the first games we made early in the Games2win business cycle.

Having said so, out of the 300+ reviews on the iTunes stores about the game, less than 5 have to do with the art.

The shining feedback is that players find the game play ‘interesting’. It’s a unique concept that has been presented to them in a game! 3. There is no need to spend money on advertising and promotions.

Parking Frenzy has reached its position across global markets without even US$ 1.00 being spent on advertising, marketing, promotions and all that jazz.

Despite what you have read and heard and what they tell you, let this game prove beyond the shadow of doubt that if you have even ‘something’ interesting out there, the world WILL download your app or game.

Also, there is no Abracadabra or magic to this. The reason why games fly off the shelf is because of ‘viral’ marketing!

Check out the chatter & tweets that Parking Frenzy has enjoyed since its launch: Lesson – let your consumers market your game. Make them your marketing managers and your advertising agency.

How wrong we were!

Both Boys AND Girls are playing Parking Frenzy and the ratio is almost even: 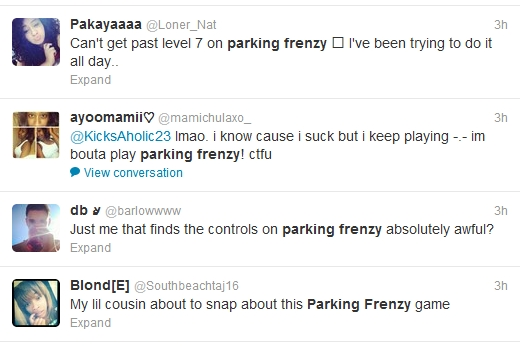 Lesson – Don’t segment your audience until downloads and usage data tell you who is really playing!

5. Be practical about correcting mistakes and act like lightning

When we first launched the game on the 1st of June, it had a loader screen that featured our website logo. This logo remained glued to the screen, while the game loaded. 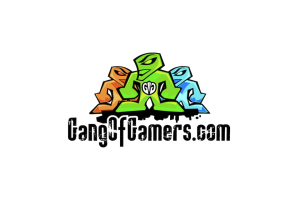 Unfortunately, this non-animated, static screen was mistaken to be a ‘defect’ and consumers began to review the game saying ‘the game is stuck, before it even starts’.

We quickly realized our mistake and thought of a few solutions:

a. Change the loader screen to show a loading bar
b. Show random messages like ‘Please wait’, ‘Car loading’, ‘Parking ticket being issued’ etc., etc. that rotate under the game logo, while the game loads.

We realized that these changes would take a bit of art and programming time while delaying the rectification of the problem.

We therefore decided to simply add a static text below the logo that tried to communicate the same message: 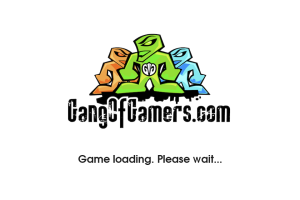 We made this change in less than 1 hour and updated the app. Then we made a fervent request to Apple to push this update in express time.

Apple responded and our app was updated in less than 4 hours of submission!

When version 1.1 started getting downloaded, this complaint had disappeared!

Lesson – be nimble and practical in solving issues, rather than trying to be perfect. And move like lightning!

We hope that these lessons will help you too.

You can download our games from the following links :

Games2win is a global top 20 casual games business and entertains over 15 million unique users a month as per comScore. Games2win owns over 600 original games that are published on its portals Games2Win.com and GangofGamers.com . And on the iOS and Android market places. More information is available at https://games2winmedia.com/about-us/