When the pirates knock, we rejoice!!

Games2Win has flourished under the piracy of its own games, which enables it to reach a large audience of 10million+ unique users across the globe using InviziAds. It also allows us to know what works and makes the consumer happy.

So what’s this fuss about? Well today, our team found out that one of our very successful parking titles “London Bus 2” has been taken and uploaded on the iOS App Store by the name “Bus Frenzy”. (Again a weak attempt to recreate the Parking Frenzy success on iOS) 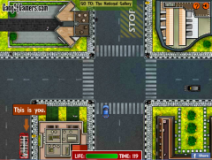 The Web & iOS game are exactly similar; even the levels are same. It just strengthens our belief in our content. Although the pirated version is @#*&*@&#, we would like to thank the developer for showing us that we are on the right track.

Unlike the web where piracy proliferates and we accommodate, Apple frowns upon such practices. We hope that the developer realizes this soon. 😉